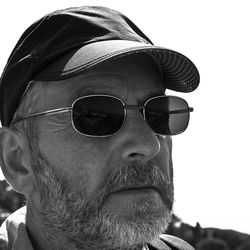 I grew up in the Northeast of England near Durham in a farming/horticultural community. My father was a Head Gardener and I spent my free time between the farm and the gardens helping out. I classed my childhood as being a working one. It was a close community. We had a farm hut where we had parties and for the grown ups there were whist drives, during elections the hut was the polling station. In the summer we had farm trips to the seaside.

When I left school I qualified as a HGV fitter and later on drove trucks up and down Great Britain including Northern Ireland, unfortunately without a camera. In the early nineties I changed career and moved into the NHS and spent over fourteen years there. I took early retirement (very early) in 2006 from the NHS due to restructure, I then took up employment at Durham University where I was Assistant Operations Manager at Ustinov College until my retirement in 2017.

I have always been interested in photography but since digital has arrived it has become even more of a passion. I can now understand why people get so committed to their hobbies and interests whatever they are.

My father was a keen photography and captured on slide hundreds of images over the years. When the family visited him he used to say lets get the slides out, and to ourselves we used to say, “oh no”. Yes, you have guessed, I have turned into my father, the difference being you know where the mouse is and I won’t be offended. If you do go for the small cross in the right hand top corner of the screen thank you for viewing my site and I wish you well.